Benefits and side effects of chicken webMD is what I googled.  Just to be fair, I used the same benefits/side effects website I use as one of my go-to-sites for supplements, plant foods and isolates. This is what I got. 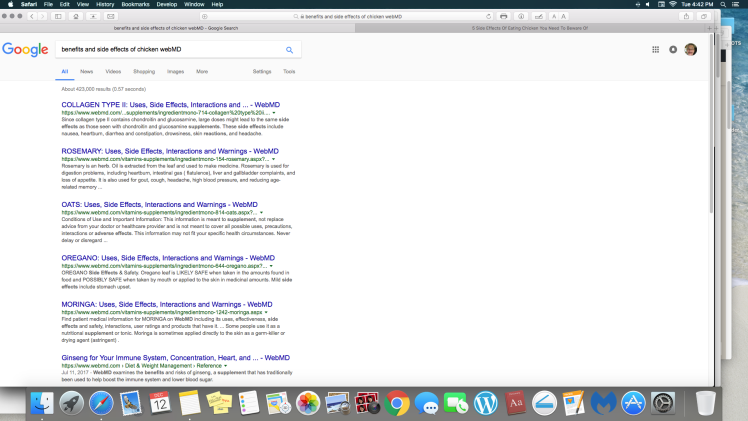 Then I googled BENEFITS AND SIDE EFFECTS OF EATING CHICKEN (even though when looking up a plant food I don’t insert the word ‘eating’). This is what I got.

“Some of these are directly linked to broiler chicken, while the others are linked to wrong cooking techniques.

Chicken has long been lauded as a healthier option than red meat, but broiler chicken, with its harmful and antibiotic-resistant bacteria like E. coli, is not the best choice. While the bacteria can be killed by cooking chicken at 165 ˚F, grilling or frying the chicken raises cancer risk. So does a diet that replaces fresh veggies and fruits with just chicken, which is quite high in cholesterol. Choose more plant proteins and roast or stew the chicken…

Source: 5 Side Effects Of Eating Chicken You Need To Beware Of

There are several sites that discuss whether a particular animal is healthy for you or not. It’s usually under certain circumstances for both. More often referred to is what the animal consists of: such as protein, fat, minerals, vitamins – basically the same composition of humans in varying degrees – which are touted as being healthy for the human. I guess based on the theory that if the human could eat itself it would, but because it can’t it needs something very close to it. That theory just doesn’t hold water.

Food is fuel. Fuel is used to activate and drive an entity (whether it be mechanical, a being or a seed). You don’t grind up cars and put them into a tank to fuel the car. You don’t grind up a plant in which to grow new plants. You need to put a seed in soil which is the fuel to nourish the seed and make it grow along with water to keep it moist and steady so it can grow – upward. Manure and compost (decomposed plants) can nourish the soil also, and can be used to steady the plant as it grows. Roots need to anchor to something – or the plant does.

Humans don’t rot animals to add to the soil to make the plants grow better. Nor do they rot humans or other animals, dry them, then put them into their bodies as fuel. Humans and a few other species are the only ones who attempt to eat themselves by eating somebody else. They are the only ones who use as fuel for energy either themselves or a close replica.

It’s a deviation – an abomination.

Who would believe that vitamins, minerals, amino acids, teas, coffee (well yes), alcohol (well yes), vegetables, fruits, seeds, nuts, grains, legumes, flowers all have benefits and side effects? Mostly all. My conclusion is that plant food is medicine. What you eat matters. If some site merely tells you that what you googled is healthy or not, then assume nobody has studied benefits and side effects. Google the specific item within a food or supplement category for best results.