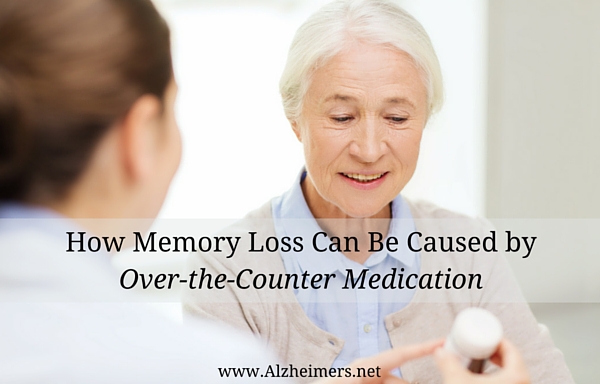 How Memory Loss Can Be Caused by Over-the-Counter Medication

Some common medications, both over-the-counter and prescription, have a certain property that can contribute to memory loss and mild cognitive impairment. Learn more about these drugs, how they may accelerate cognitive decline, and what to do if you or a loved one is taking one of these drugs and experiencing memory loss.

Drugs that cause MCI and related memory loss have a property known as “anti-cholinergic,” that means the drugs slow the neurotransmitter acetylcholine which plays a large role in memory retention. However, very few drugs are labeled or classified as anti-cholinergic drugs.

Additionally, several studies have shown a higher rate of cognitive decline for people who regularly use anti-cholinergic drugs. In one specific study, a research team observed nuns and clergy from the Rush Religious Orders for an eight year period and concluded that those who used medications with anti-cholinergic properties experienced a faster rate of cognitive decline…

There is a great service (https://myhealthbox.eu) that
is available (for free) for anyone looking for information on
medicines and healthcare products.

They provide easy access to official Patient Leaflets and Technical
Documents (for professionals) on over 2 million products in 35
languages….

I’ve had several older friends, who were told they had “early” Alzheimer’s disease, completely remedy the problem with 500 mcg sublingual B-12. Doctors seem to be prepared to dismiss any cognitive issues as “early” Alzheimer’s and some are prescribing Alzheimer’s drugs, which will not help a B-12 deficiency.

Is this due to the medications reducing or depleting your B12?